Our COVID precautions are causing fulfillment delays of up to two weeks. COVID-19 info › The star of the Underground has arrived here with me in the rainy UK, and was more than worth the wait!

I love absolutely everything about this figure - the attention to detail in everything from the design of the box to the figure itself completely blew me away, and truly goes to show how much love and care Fangamer put into all of their products. He is an absolute must have for Undertale/Mettaton fans, I don't have words to describe just how wonderful he is!

He is now wearing my worm on a string as a fetching accessory and will have pride of place on my desk, cheering me on while I do my schoolwork :)

Thank you so much! 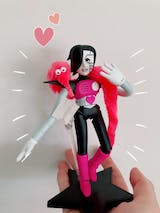 Hi!
Today we received the box, the toy is made of very high quality, my daughter is delighted! Delivery to Chelyabinsk (Russia) about a month. Thank you very much for your accurate work!

Today I've received a true idol everyone craves. The box itself is a piece of art with all the sprites and colors, and G L I T T E R. Well done! And, my goodness, the figurine is magical. It smells, looks over all the prettiest way, and bends in its joints so nice! Love the coquettish eyes of Mettaton! Eyelids appear so alluve and smooth though. I'm so glad for that purchase. By the way, the QR-code thing is hilarious! I'll mention the art piece on it but won't spoil the digital pattern itself. Also I adore this beautiful P5 sticker. 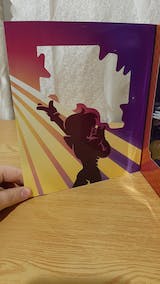 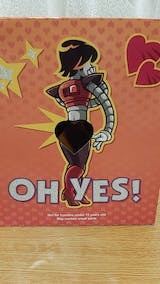 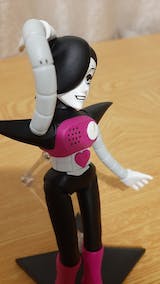 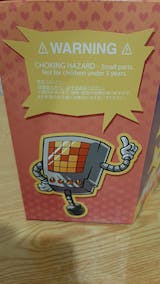 Sooo, not a lot of stuff I can say that hasn't been said already!

The outer box was a nice clever idea, having it be box/rectangle Mettaton! And, my god, the inner box the figure was in was just so gorgeous!! The glittery texture on the letters, the art on the box, and if you get one of these, scan the QR code. It's amazing!

Now, the figure itself is perfect! I love the backside switch feature, and would definitely play around with it for hours, maybe days!! Now in some of the photos, you can see that he has a perfect worm as a boa! The details are all on point and perfect! Now, the leg joints are a little wonky, but after messing with them a bit, they'll make a bit of sense! His arms are very bendy and poseable! Without his stand, he can still stand very well! And compared to my Vanny figure, he's just a bit taller than her, but also, Funko is a different manufacturer from Fangamer! Fangamer is also better than Funko, in my opinion! But do be careful with the shoulder pads, since they're the same material as the arms.

Some wants that I think would be nice would be some bendable fingers, so the poses could be even better when compared to the game sprites! Maybe some changeable heads with different expressions, again, to be even closer to in game! And one last thing, removable legs and arms, again for in game! All of my wants are just to be even closer to the game!

Now, if you're an Undertale/Mettaton fan, I totally recommend this figure! He's perfect and handsome for practically anybody!! One thing I really want is a Mettaton NEO figure to finish the little Mettaton collection of figures! The figure is high quality, the package is high quality, and everything is high quality! He had a very quick delivery for me, and his boxes are too nice to toss out! If you get the chance, totally order this guy!! 10000/10! 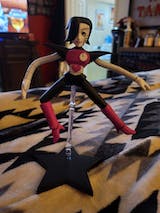 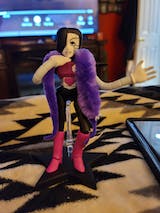 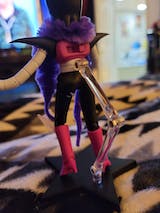 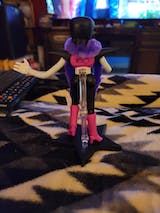 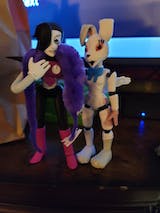 I just got this figure along with the Space Junk T-Shirt, and this is fabulous! The the box it was shipped in was designed like his box form! The figure's box is designed amazingly! I am very happy with this purchase! (Sorry if the photos aren't the greatest quality)

(Hint: Not sure what size to get? Get whatever size you're wearing right now!)

Note: most our ladies shirts use District Made garments, however some older shirts use American Apparel and Bella brand garments, which have a much smaller fit! Please check the product page to be sure what garment is used.

Our larger unisex sizes must be printed on different garments due to product availability. Sizes 4X-6X are printed on the following shirts (as noted on individual product pages):

We use District Made slub polos (unisex and women's). A few of our older designs are made with Hanes Cotton-Blend HX054 (unisex size chart) and Bella Style #750 (women's size chart).

Our newest garment type! These relaxed fit, cozy sweaters are perfect for school, the office, or just lounging at home. We use the District Cardigan Sweater for both men's and women's sizes (size chart here).

We print our jackets on a variety of garments to achieve a wide range of styles- there's something for everyone, whether you're plowing through a northeastern winter or occupying milder southern climates.

Note: sometimes larger sizes and ladies sizes will have to be printed on different garments due to availability. This can change the color and even fabric blend of your order, so check the product pages carefully.

Mettaton EX is now available as our tallest, most bendable figurine ever. It's the idol everyone craves!

This official UNDERTALE figurine was modeled by Yukanuntiusel with assistance from Gijs van Kooten, with packaging designed by Laura Verdin.